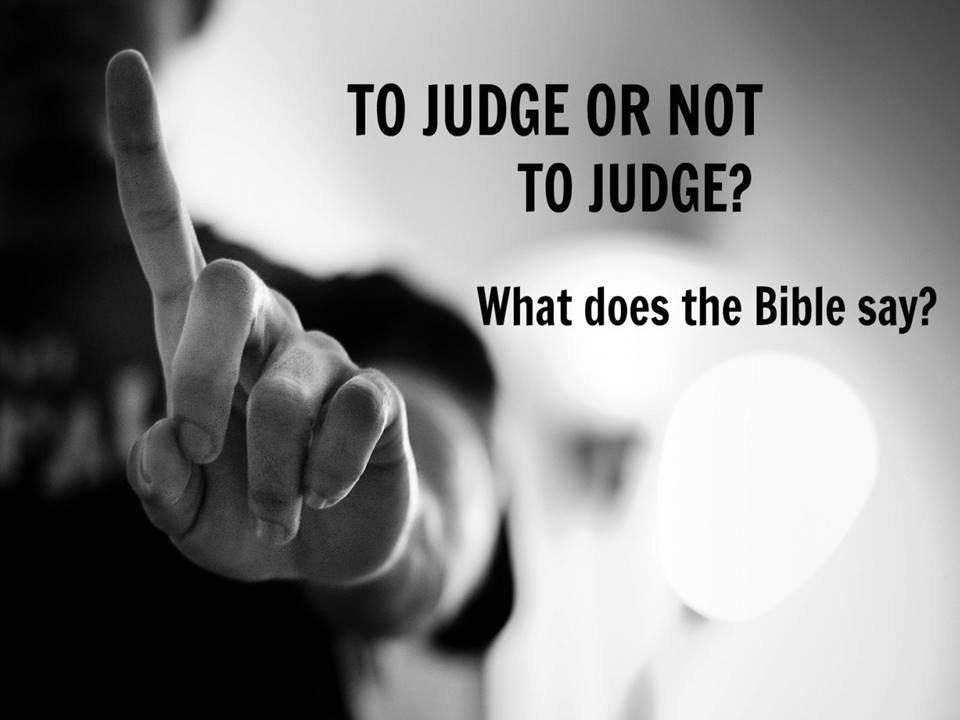 Probably the most widely quoted saying of Jesus, and often quoted not only by many Christians but from those who don’t even believe in the scriptures is “Judge not, that you be not judged.” – Matthew 7:1

Frequently it’s used in a context such as: “Yeah, she left her husband, but who am I to judge? After all, Jesus said, ‘Judge not, lest you be judged.’” or “Don’t judge me, Jesus said you’re not supposed to judge”. The idea of being non-judgmental is used as a defence against any assertion that a given person’s behavior is wrong.

Basically, the meaning being presented is “You don’t have the right to tell me I’m wrong.” Ironic given the fact that those who are themselves condemning condemnation are judging others for doing what they themselves are doing – judging someone for being judgmental. In other words, they are ‘judging’ me for ‘judging’ them (or vice-versa).

But let’s get real for a moment. In a sinful world, no community can exist for long where nobody is ever held accountable; no teacher would grade a student’s performance; no citizen would sit on a jury or call a failed leader to account. Modern Canadians however suffer from a fear of judging. Passing judgment on the behavior of fellow human beings is considered an act of barbarous, savage, and uncivilised intolerance.

Why? Because, our culture tells us, we are all flawed, and people with flaws have no right to judge other people’s flaws. Furthermore, the modern westerner does not believe that there are objective standards by which to judge anyways. And where there are no standards, there is nothing by which to measure behaviour.

So, we (society) then seem to agree on a value of allowing everyone to do what is right in his or her own eyes, each person deciding for himself or herself what is right or wrong, telling each other through our social media’s to “tolerate” (which in their minds essentially means “celebrate”) sinful activities. In fact, the sentiment today is that if you don’t ‘celebrate’ a particular sin, you are then automatically condemning those who are. Those who take seriously the biblical warnings against sin and dare speak out against evil are written off as religious fanatics, and ironically “judged” as being “judgmental.”

So the average westerner now walks through their lives telling themselves (and anyone else who will listen) that they’ve evolved to a place of non judgmentalism. And because they are now so enlightened, they have risen above the need to commit the sin of judging others.

The reality though is that you’re only lying to yourself when you say that you don’t judge people. Yeah, I get it, you have Tupac’s “Only God Can Judge Me” tattooed on your upper back, but I guarantee you judge people more than you think. Everyone does it, so let’s stop beating around the bush and stop acting like we’re not engaging in the guilty pleasure. Let’s not judge others when we deem it necessary on our part, and then hide behind culture’s politically correct mantra to not judge others.

When Jesus said not to judge others, he didn’t mean that no one can identify sin for what it is. In fact, Jesus gives a direct command to judge in John’s gospel, “Stop judging by mere appearances, but instead judge correctly” – John 7:24. Ok… so it appears that Jesus says not to judge but then he gives instruction about judging correctly. What to do? To Judge or not to judge? Taking this verse from John and some others in their proper context’s, what we discover is that it’s not the judging that is discouraged, rather it is the type or motive behind the judgement.

Jesus follows up his warning against judgment in Mathew 7. “For with the judgment you pronounce you will be judged, and with the measure you use it will be measured to you”. Matthew 7:2

That means then that if we can’t hold to the standard we use, we have no business applying that same standard to others. Jesus spoke about hypocrites in Matthew 6 before he subsequently followed it up by a warning against hypocrisy. “Why do you see the splinter in your brother’s eye but do not notice the log in your own eye? … You hypocrite, first take the log out of your own eye, and then you will see clearly enough to take the splinter out of your brother’s eye.” – Matthew 7: 3, 5

When we point out the sin of others while we ourselves commit the same sin, we only condemn ourselves “Therefore you have no excuse, O man, every one of you who judges. For in passing judgment on another you condemn yourself, because you, the judge, practice the very same things.” – Romans 2:1

“Do not judge by appearances, but judge with right judgment.” – John 7:24. Simon the Pharisee passed judgment on a woman based on her appearance and reputation, but he could not see that the woman had been forgiven; Simon drew Jesus’ rebuke as a result of his self-righteous judgment (Luke 7:36-50).

Self-righteous judgment is wrong. We are called to humility, “God opposes the proud” – James 4:6 and remember that, “All of us have become like one who is unclean, and all our righteous acts are like filthy rags; we all shrivel up like a leaf, and like the wind our sins sweep us away.”  – Isaiah 64:6

The thing is we don’t want to be a society of push overs, do we? If life’s tough for us, should we not make it tough for others? Why should they have a free ride? Challenge – isn’t that what life’s all about? As I go down that path, I invariably get caught up short with words like mercy, love, grace, forgiveness, kindness. That’s what everyone wants. Then there’s King David – as tough as they get. To survive in those days and then excel was no small feat. And yet as he lays on his bed he says, “O Lord, please help me … listen to my prayer for mercy.” – Psalm 28: 1-2

I hate being judged unfairly and harshly – I much rather be shown a bit of mercy. That being the case I need to remember to extend mercy to others, first. As we judge we must remember that harsh, unforgiving judgment is wrong. “Always be gentle toward everyone” – Titus 3:2

Yes, we’re warned against judging others when it’s done unfairly or unrighteously, but Jesus extols “right judgment” “Do not judge by appearances, but judge with right judgment.” – John 7:24.

Truth is, the Christian must “judge” or discern between good and evil, “But solid food is for the mature, for those who have their powers of discernment trained by constant practice to distinguish good from evil.” – Hebrews 5:14

There must be spiritual evaluations made of the words and behavior of others, not to find fault, but to effectively guard our hearts against error and sin. In fact, Jesus warns his disciples to, “Beware of false prophets, who come to you in sheep’s clothing but inwardly are ravenous wolves. You will recognize them by their fruits.” – Matthew 7:15-16

In the end do we judge, or don’t we? Yes, we do. But the true disciple of Jesus, judges in love. Love requires that we gently confront those in error with the truth about their sin with the hope of bringing them to repentance and faith, “Whoever brings back a sinner from his wandering will save his soul from death.” – James 5:20

One Reply to “To Judge Or Not To Judge – What Does The Bible Say?”